At around 10:30am, Reisterstown and several other companies were alerted for a truck which hit a car and then hit a house.  Squad 414, Engine 412, Special Unit 418 and Utility 419 responded and found a box truck had hit a car and then plowed into a house. Driver’s from both vehicles were trapped.  Command requested a heavy rescue box which brought more units including the USAR team from Station 17.

Crews were on scene for approximately an hour for extrication, packaging the patients and loading onto the helicopter.

Units were dispatched for 10-50PI Rescue reported as a tractor trailer overturned into a guardrail. Squad 414 responded and was first arriving to find one person trapped in the cab against the guard rail. The squad crew extricated the patient who was transported to a local hospital. MDE and Hazmat units responded to pump the fuel out of the saddle tanks.

Benvenuto to Ristorante FIRENZE! We invite you for a special preview of our Tuscan dining experience featuring:

A portion of the evening’s proceeds will benefit the Reisterstown, Owings Mills & Glyndon Volunteer Fire Departments.

Great meal for a great cause! Mangia! 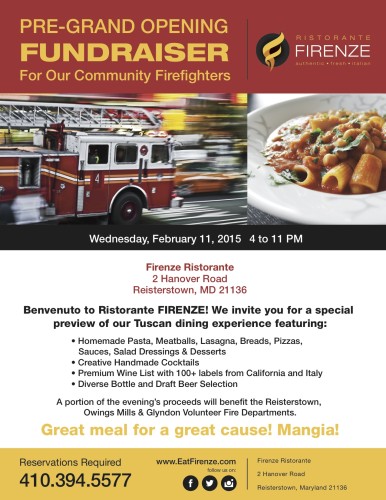 The members of the Reisterstown are very pleased to announce an evening with Billy Goldfeder on the topic of firefighter and fire officer survival on the fire ground.
Billy Goldfeder is the co host of the web site www.FirefighterCloseCalls.com and the author of “Pass It On” . He currently serves as the Deputy Chief of the Loveland-Symmes Fire Dept in Ohio.
We are honored that Billy Goldfeder is willing to be with us and we also want to invite you to attend.
February 3rd 2015
1900hrs
RVFD Station
108 Main Street
Reisterstown Md. 21136
If your station is planning on attending, please contact RVFC so we can make plans for space.

A new year has begun and it is interesting to look through the stats from last years calls.  In all our station was called out for 1,696 calls which includes 1,193 for suppression (engine and/or squad) and 623 for EMS (ambulance).  This is almost 5 calls every day on average.

Our busiest time of the day for the ambulance was between 2pm and 3pm (118 calls) and for the suppression the busiest was between 6pm – 7pm (68 calls). The busiest day of the week was Fridays for ambulance and Wednesdays for suppression.

The call type most frequent for the ambulance was Sick Subject (which is very general) at 84 calls. The most frequent call type for the suppression side was Dwelling Fire (a house as opposed to a building or apartment) at 70 calls.

Our longest suppression call was 4 hours 23 minutes for a fire in Chestnut Ridge’s area in June and the second longest was 3 hours 17 minutes for a brush fire on Gores Mill Road in April.  The longest ambulance call was for 3 hours 6 minutes for a vehicle collision in December.

We are proud to serve our community…